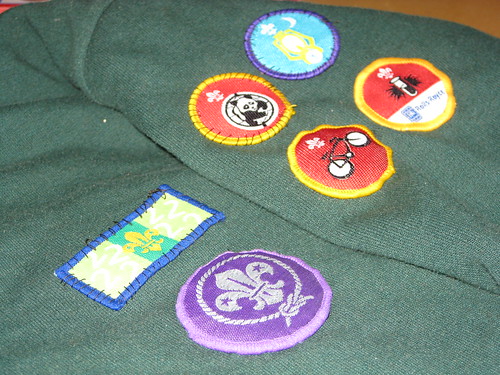 As a child I hated Cubs. All that running around and shouting, the church parades, and camping on a damp field at the edge of Danbury Common.

But in a twist of fate I find myself parent to three boys far more enthusiastic than I ever was; my oldest recently got a badge marking seven years – more than half his lifetime – as a Beaver, Cub or Scout.

That’s seven years of walking him to and from the weekly meetings in the school hall, driving to the scout hut down dark country lanes, dropping off and picking up at obscure Dales campsites that satnav passed by. If the youngest one follows in his muddy footsteps I’ll be doing the same for the next seven years as well.

I remain both surprised and grateful that there are grown-ups who volunteer to take my children camping so I don’t have to.

And just recently I’ve come to wonder at the infrastructure that has grown up around the scouting movement in the 106 years since Robert Baden-Powell ran his first experimental camp at Brownsea Island, Dorset.

Within an hour’s drive of our home there are dozens of scout sites tucked away in valleys, down farm tracks, one on an unpromising gap between a canal and a railway line. The Wakefield District even has its own canal boat.

Then there’s the knowledge and social capital. My boys are fourth-generation scouts – at least four of their eight great-grandparents were active in the movement. Yet their campfires, penknives, funny handshake and woggles would be instantly recognisable to scouts who bob-a-jobbed in last Great Depression.

When I reflect on its future, I’m not that interested in whether we’ll experience life through screens, or glasses or holograms or deep brain implants, or whatever. The scout hut now has flushing toilets, not a hole in the ground, but the boys would still pee against a tree if you let them.

What matters to me as a second-generation geek is the culture and shared set of values that emerges in a movement over multiple lifetimes.

I relish the thought of heritage servers and listed fibre optic cables.

How brilliant would it feel to comment on a 50-year-old Basecamp, or push to a 100-year-old Github repository?

Imagine watching the accelerated sights of a webcam that has lain forgotten on someone’s window sill for a century or more. Or sifting through an heirloom dataset.

How will the do-ocracies that power hackspaces and open source projects manage the passing of batons from generation to generation?

Will the elders entreat sceptical youths to eschew the home comforts of AI-generated code for the delights of hand-whittled trinkets in Python?

In 2093, will our great-grandchildren gather to mark 100 years since the first experimental website was put up by Tim Berners-Lee (like Baden-Powell a knight of Britain’s exclusive Order of Merit)? What greetings will they use? What songs will sing?

And how will the network bear the scars of countries that have come to blows, made peace and repaired the damage, as have many of the nations in the worldwide community of scouts?

I picture a world much more complex than ours, more resilient too, yet in some ways instantly recognisable.

The example of scouting makes me optimistic about the decades to come – not because of the things we’ll invent between now and then, but because of the experiences we’ll share; because the future will have more history behind it.

3 thoughts on “Keep the campfire burning: a thread of whimsy from Baden-Powell to Berners-Lee”