Notes for my TEDxLeeds presentation, “The Makers of Leeds”. The Prezi version is here. 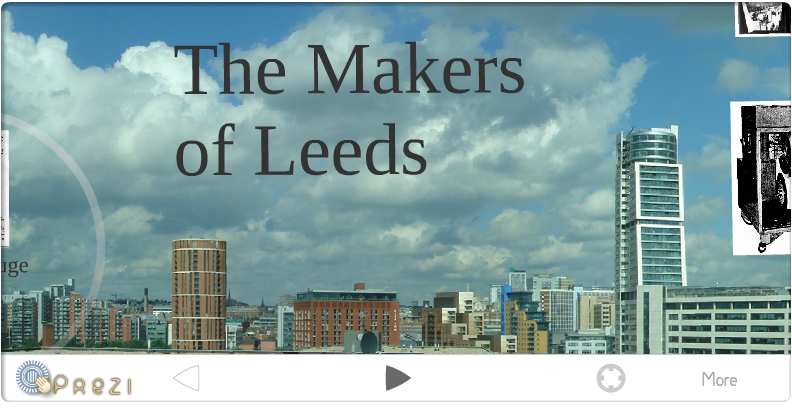 It starts with the amazing view from the top of the TEDxLeeds venue, the Mint, which looks out over Leeds on all sides. The American architect Hugh Newell Jacobsen said:

“When you look at a city, it’s like reading the hopes, aspirations and pride of everyone who built it.”

And where better to illustrate this than in one of the world’s oldest industrial cities? The new cities springing up in Asia, Africa and South America have 200 years to wait before they have such depth of stories.

Looking down towards Leeds Bridge, we can imagine the scene where Louis Le Prince shot one of the world’s first ever movies. Together with his wife Lizzie, who trained in ceramics, Louis started a “school of technical arts” in Leeds. This marriage of arts and science is still alive today among the Leeds Savages and hackers at the Hackspace. While we think of new media as bits and bytes, digital content, the new media of the late Victorian period was chemistry – specifically the actions of light and chemicals on ceramics, brass, paper and celluloid. The Le Princes had to combine these things to come up with a whole new artform.

But to make his design a reality, Le Prince needed a way to reliably move the film through the gate of his camera or projector. He turned to an inventor who had something every city needs – tickets (just think of all those football matches and theatre performances). James Longley had invented a machine for dispensing tickets. Le Prince commissioned him to combine this know-how with his own work on photography to create his camera-projector.

And the result is this snippet of traffic moving across Leeds Bridge. If you don’t believe how important this is, you can look it up yourself in the Internet Movie Database where Le Prince dominates the movie charts for 1888. There are no entries for 1887.

Just down the road from Leeds Bridge is Meadow Lane where hacker Joseph Priestley moved in near Jakes and Nell’s brewery. He noticed bubbles on the vats of beer and wondered what they were. This led to a series of experiments which isolated the gas we know today as oxygen. Priestley shared his discoveries of the effect of this gas on plants and animals with his coffee-house friend Ben Franklin who, in a startling leap of imagination, suggested that we should stop chopping down trees. The green movement began wih a mint plant in a bell jar in Joseph Priestley’s kitchen. Steven Johnson also tells how Priestley invented a process for making fizzy drinks. He open sourced the method and Johann Shweppe cleaned up.

Speaking in Shanghai, the writer Charlie Leadbeater set out six C’s that determine a city’s capacity for innovation: combination, conversation, co-evolution, challenge, commitment and connection. I think we can see plenty of all six C’s here in Leeds. The Le Princes combined art and science, mchanics and chemistry to make moving pictures. Priestley’s exchanges with Ben Franklin and his French rival Antoine Lavoisier give us conversation.

For co-evolution – the ability of suppliers, manufacturers and customers to develop solutions together – we look across the city to the three Italianate towers of Tower Works. Thomas Harding who built the towers was a maker of pins, not dress-maker’s pins but the pins used by billion in the textile industry. He understood that the business would prosper if his customers could rely on standard sized pins from multiple suppliers, so he worked with his customers and competitors to develop a range of standard pin sizes, called the Harding Gauge. For a modern parallel, picture those pins as angle brackets and the Harding Gauge as HTML, a standard language facilitating endless innovation and efficiency improvements.

Co-evolution was also central to the parallel developments of coal-mining, manufacturing and consumption in our city. In Holbeck, Matthew Murray built the Round Foundry, possibly the world’s first integrated engineering works. But he faced challenge in the form of competition from Boulton and Watt, a much bigger name in the steam engine trade. James Watt Junior stole Murray’s ideas, recruited a spy at his factory and bought up land to stop Murray growing his business. But the competition spurred Murray on, and he built the steam engine for the first commercially-successful steam railway at Middleton Colliery.

It seems unjust that the engineer commemorated by a statue in City Square is not Matthew Murray but his nemesis James Watt.

Murray’s mentor John Marshall faced challenges of a different kind. He was a flax spinner and flax spinning was a flamable businss. When one of Marshall’s wooden-framed mills burned down he partnered with a designer of a different kind of mill, one made of cast iron and brick. That’s commitment! The resulting fire-proof mills, like Marshall’s Mill in Holbeck are an important step in the evolution of the skyscraper. So it’s fitting that Leeds is the home of the best new tall building of 2010.

We can list a series of start-ups and businesses grown in Leeds:

But what’s left as we move from the indutrial to the post-industrial? At St Aidan’s former colliery near Garforth a five-storey-high giant walking robot stands marooned in a Teletubbyland of grassy hills and lakes.

What’s left, I think, is narrative capital, the wealth of stories we can draw on to make sense of our present and inspire our future, it’s the power people have to tell stories about their places and lives. And unlike coal, narrative capital never runs out. It’s a rich seam that’s getting deeper all the time.

Stories belong to everyone, so as well as the great innovators, the dead white men, it’s important to remember the contributions of ordinary people, like the thousands of women who laboured over spinning machinery in Temple Works, in its heyday the biggest room in the world.

And stories can be slippery when we try to grab hold of them. Of the heroes listed here:

All of those people bear out Charlie Leadbeater’s sixth C, connection to the wider world. As do the buildings that our Nineteenth Century predecessors have left us. Squint and you can see:

So when I hear that people want to make Leeds “the best city in UK” I wonder whether that’s ambitious enough. Our predecessors saw themselves not as better than, but certainly equal to, any great city anywhere in recorded history.

Which makes me optimistic for the future of the city. As the American writer and campaigner Jane Jacobs put it:

“Lively, diverse, intense cities contain the seeds of their own regeneration, with energy enough to carry over for problems and needs outside themselves.”

8 thoughts on “The Makers of Leeds”