In part 1 of this update, I talked about some of the things that have changed for me at work over the past six months. Much of that is down to the challenge, support and learning I’ve experienced on the NHS Leadership Academy’s Nye Bevan Programme. The programme is designed to:

”develop the skills, knowledge, attitudes and behaviours to succeed and operate successfully at executive level as part of the board”

It does this through a series of residentials, and also, powerfully, through self-managed learning sets. This is my learning set and me on polling day, ready to venture out into the December weather after celebrating a successful conclusion of our work together. I couldn’t have done it without them.

The following is a lightly edited version of my closing statement for the programme, reflecting on what I personally have learned…

One of the first frameworks we considered on the Bevan Programme concerned three types of change – from simple course correction, through change of thinking, to deeper change of self. Throughout the programme I challenged myself, and others challenged me, to make all three types of change. Drawing a picture helped me celebrate not only the things I learned, but also how I learned them:

I drew my picture as a spiral because it took me several iterations to reach the heart of this learning. 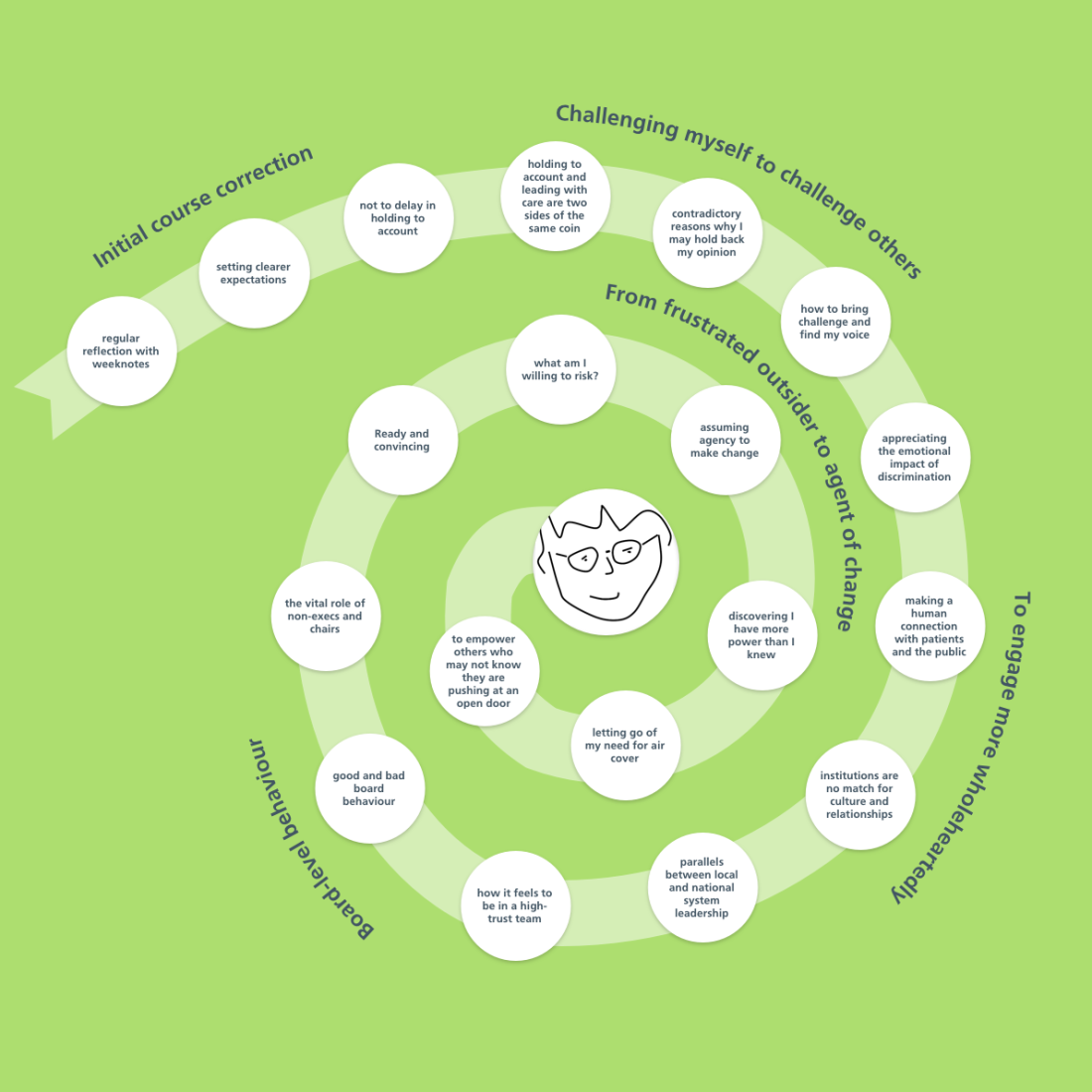 Putting weeknotes in my learning contract helped me to build a habit of regular reflection that I intend to retain. I’m now more aware of the NHS Constitution values, my priorities, and week-to-week performance. Other people can see what I’m thinking about and spending my time on.

My 360 degree feedback showed I wasn’t as good as I thought at setting clear expectations, so I practiced talking about outcomes and timescales, making clearer when I’m expecting others to take the initiative. I’m now more mindful of all the ways I communicate, through action and inaction, and how to use this strategically as a leader. On a board, with bigger spans of controls and influence, the ability to communicate clearly and to the point would become ever more important. Small signals send big messages.

I also realised the negative impact when I have failed to hold others to account in a timely manner. I now try harder to give clear feedback, and know that this demands preparation. This is something I’m still working on. Knowing better what holding to account truly means, I will practice and pay attention when I might not be doing it. I have noticed on several occasions a sense of urgency to give feedback that I had not felt before.

In redoing my 360 in October, I got evidence of impact from a direct report:

“Last time I gave feedback in this form I said I felt he was difficult to read. I feel like this has changed and I no longer think this.”

Challenging myself to challenge others

I learned that leading with care and holding to account are two sides of the same coin. I used to think leading with care was the soft stuff. Now I realise it’s as much about attention to detail, listening deeply to what people say, and then acting upon it. The organisation change that I led on went better for our people because I was consciously working on this. I will keep asking “what do I need to take care of?” and sharing the answers with my peers and teams.

I reflected on my contradictory reasons for holding back my opinion, when I should be more open. I thought I was being measured, and would address things later. Now I’m more likely to say what I think, and I’ve seen significant results because of this. I learned that I can bring challenge more spontaneously at the right moment. Previously, I waited to be asked to input to things, took too long to prepare, and gave up too easily when a message didn’t land on the first attempt. Now I’m more likely to say “that’s not acceptable” at the point where something can be done about it.

I learned about the emotional impact of discrimination and my own white, male privilege. Before the Bevan Programme, I understood privilege on an intellectual level, and thought I was supporting diversity. The programme gave me the knowledge and confidence to speak up on behalf of people who face discrimination at work, and to see a real change as a result. But organisations can also go backwards on diversity. I must make a conscious effort to bring in the voices that are missing, and be confident to speak up on their behalf.

I learned how to really engage people through observing the Leeds Health and Wellbeing Board, and by helping to co-create a shared patient engagement policy for NHS Digital and NHSX. When engaging with the public previously, I was afraid I might contradict the corporate line or stray from the reassuring conventions of formal meetings. Now I would approach things differently. I would start by making a human connection with patients and the public, and then address honestly what my organisation can do. I’m determined that any board I’m on should be as comfortable interacting with patients and the public as with colleagues and peers.

The parallels between local and national system leadership are greater than I realised. One reason I chose the Bevan Programme, over leadership development specific to arms-length bodies, was to learn how local services worked. Being conscious of my ignorance in this area had previously held me back from making suggestions that took me outside my national organisation comfort zone. Thanks to what I’ve learned from Bevan Programme peers, I can speak more authoritatively about how local systems work, and how they are transforming. I have been able to connect with people in commissioner and provider organisations to help them solve their problems and shape what we do nationally.

I have learned that institutions are no match for culture and relationships. In some areas of my work, I’ve seen “culture eating strategy for breakfast.” If starting those things again, I would pay more attention to existing relationships and power structures being lifted and shifted. At the same time, I have made a greater impact in my organisation, because I have deeper insight into how things get done around here.

On a board, I would now be able to act more effectively as a system leader, with the needs of all health and care in mind, and a sharper awareness of my own organisation’s place in the system. I would pay more attention to the established networks and relationships that make everything in health and care a “brownfield site”.

At my Bevan Programme interview back in January, the panel noted that I “seemed very nervous initially,” and questioned my “ability to share self”. They queried my willingness to accept feedback, and found my “relationship with power/authority/hierarchy may be challenging”.

In September, I had the opportunity to demonstrate to a panel of staff and patients how I had changed those things, and to talk about the difference my participation in the programme had made to others. Preparing for this also helped me to sharpen my narrative about the impact my digital profession members make on patients and the staff who deliver direct care. I was pleased that the panel found me “convincing,” with feedback including: “Persistent with challenge to achieve desired outcome resulting in policy change.”

A patient on the panel asked a great question: “What are you prepared to risk?” I told them I was prepared to give up a job where I couldn’t make a difference. Some panel members felt that “didn’t reflect team working and/or long term commitment”. That was disappointing. It’s not how I meant to come across. It set me thinking about my relationship with peers and the risks we take together.

Within the learning set, I experienced what it feels like to be in a board-level team that has mutual trust, support and challenge. I had worked in high-trust teams before, and tried to create that environment for my direct reports, but hadn’t considered how important it was for me to be part of such a team as a peer. In joining a new senior leadership team, I need to develop the peer relationships that will allow us to work together, and hold each other to account. As a board member, this would be even more important, because boards succeed collectively, or not at all.

I had seen peers step up to board level, and considered such a job could be something for me in the future. Now that I understand the role of an executive director better, I can say I am ready for one. More importantly, I know why I would apply for it, and on what terms.

I have clarified a longer-term career aspiration to a non-exec or chair role, something I hadn’t really considered before. Now I pay attention to how people chair meetings, to the team dynamics, and think about the role that non-executive directors should play in holding an organisation to account. I have reflected on the skills and experience I might need to gain for such roles in the future, and hope to spend more time learning from experienced non-exec directors and chairs.

From frustrated outsider to agent of change

When I applied for the Bevan Programme, I knew I was reaching a limit in how far I could get in my own organisation without developing my own leadership capabilities. While I had allies and supportive managers, I often felt at odds with the organisational culture. I have learned through this year that I wasn’t alone in wanting to make radical changes to better serve patients and staff.

I now realise I have more power in my organisation than I knew. I had hit obstacles in getting things done, and given up too easily. The programme made me more determined to keep pushing on points that are important. I’ve realised I can do this with a lightness of touch and good humour, as well as a sense of determination.

Very recently, I’ve reflected on my pattern of looking for leaders whom I admire and trust as advocates, and only then saying what I really believe. I now realise that I must also be able to lead without their protection. As a board director, this would be true by definition: I would have to be the one providing air cover for others, without always having it for myself.

Now I have a new question: how can I pay that forward? I previously prided myself on my ability to inspire and empower others, but it turned out they were not always clear that they had that power. I need to let them know that I trust them to perform, and that they’re probably pushing at an open door. For their own career advancement, they need space and encouragement to show what they can do. I’ll also make a point of mentoring people at all levels, especially those from groups that aren’t yet well-enough represented in our workforce or our boardroom.

In part 3 of this post, I’ll talk about what comes next.