The night we kicked off Leeds Service Jam I sneaked away a little early from the post-theme-reveal dinner to a different pub on the other side of town. There I found an astonishing assortment of former colleagues from my time at PA New Media, Ananova and Orange – some of whom I hadn’t seen for a good 10 years. We were there at the initiative of one of our number who was finally leaving in an umpteenth round of re-orgs and redundancies. Yorkshire ales were consumed; worlds were set to rights. As we chatted, it emerged just how many of us had now made our escapes from the shackles of regular salaries, paid holidays and pension contributions to a more independent, if precarious, employment status.

As it happened at the time, I was part-way through Warren Bennis and Patricia Ward Biederman’s classic book ‘Organizing Genius: The Secrets of Creative Collaboration’. Their hypothesis was that the world of 1997 was too complex for the “great man” model that still makes up most of our leadership mythology to this day. The qualities of the leader mattered (undoubtedly this was true at PA/Ananova/Orange Multimedia) but mainly so far as they could assemble and defend “great groups,” “free-form organisations more interested in their mission than their hierarchy” who despite seeming to be underdogs “believe they’re bound to succeed.”

Without presuming to place my now middle-aged cohort of late 90s new media colleagues on the same pedestal as Disney’s feature animation studio or the user experience pioneers at Xerox PARC, I think all of us in the pub that night knew that feeling. And once we’d been there, we were spoiled for life. The experience of working as part of that team set a bar so impossibly high that most of what passed for corporate life thereafter would be a disappointment.

So I count myself incredibly lucky that my work in my third year as an independent consultant has allowed me to be a bit player in multiple great groups, and to be present as a trainer and service jam host at the forming, storming and norming stages of even more.

This time last year, I’d just put up my hand to host the first ever Leeds GovJam, part of the global service jamming movement. I knew it would be good because I had such an awesome team of volunteers behind me. They – and the 40 or so jammers who came along – filled the fantastic ODI-Leeds space with 48 hours of joy, creativity and masking tape.

What happened next was even better. Jammers took their service design and design thinking enthusiasm back into their organisations. One ran a whole day of jamming for her Civil Service Fast Stream colleagues. Another commissioned Kathryn Grace and me to train her NHS team who in turn went on to run workshops involving service users and clinicians in people-centred service redesigns.

This week I met with more potential jammers and volunteers for the 2015 Leeds GovJam. Tickets go on sale on Monday. Leeds GovJam is run by volunteers, and nobody makes a profit from it. Sponsors and supporters help us keep costs down, open up new possibilities, and provide extra treats and prizes to jam participants. If you could be one of those sponsors or supporters, please get in touch.

Among last year’s GovJammers were some of the Department for Work and Pensions team. When I first visited their Digital Academy it was nothing but an empty office space on the ground floor of an anonymous DWP building just south of the River Aire.

The first cohort arrived in the summer of 2014, since when I’ve had the privilege of working with dozens more civil servants committed to making their work more user-centred, more agile and more digital. Among the most rewarding times have been when cohorts leave the academy as a single team, ready to work together on a digital service. Members of the wider Leeds digital community have been very generous with their time as guest speakers in a series of lunchtime talks for the academy – if you’re one of those people, thank you!

Alongside my work for DWP, I’m also still involved with the Government Digital Service’s Service Manager Programme. We hit our target of training 150 service managers from across departments and agencies. For people in other digital roles we created a new Digital Foundation Day which is delivered through Civil Service Learning.

In my report last year, I mentioned teaming up with associates. It’s great to work with Sharon Dale on much of the digital capability stuff that I do. Sharon and I have different skills and experience. I think we make a good team.

Working for Citu with Tom, Andy, Phil and Paul has been a slow-burning but rewarding project. We’ve launched a beta version of the digital service for people moving into brand new passive houses a Little Kelham in Sheffield. I even got to write it up as a case study for Claire Rowland’s forthcoming book ‘Designing Connected Products: UX for the Consumer Internet of Things’. 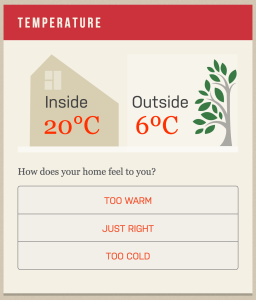 It’s been a fascinating service design and innovation challenge. We had to get to know a full stack of internet of things technology, working across the site as a whole, and be sure all the parts would play nicely together to deliver a good experience to every user.

In construction, some things are literally set in concrete, but IoT services can and should be more malleable than that. Knowing requirements will change over time, we’ve taken a user-centred, agile approach to the design process. I hope we’ll continue to work with Citu to support, learn and further develop the service in partnership with residents as they move in and settle into their new homes.

When looking at new opportunities, I use a little Trello checklist to see if they’re a good fit. Engagements don’t have to tick all the boxes, but it helps, and increasingly the answer is yes to all of them…

One of my ambitions for year 3 was to spend less time on the train to London. I’m pleased to say, that worked out well. The chart below shows where I spent the days I billed to clients over the past two years. From being mostly London a couple of summers ago, it’s now flipped to being mostly Yorkshire-based. I love working with teams in the capital, but Leeds is home and there are lots of exciting things to do here right now.

The other thing I’ve tried to optimise is how much time I spend with different clients. I like to go deep on a project, but also to keep doing new things across a range of sectors. It’s been a delight to be able to flip from public sector training to an IoT project and back again, and I believe my work on both those things benefits from the broader perspective.

You’ll see there’s a power law distribution – three big engagements that have taken up the lion’s share of my time over the past 12 months, followed by some speculative stuff that may lead to more in the future. I also try to say yes to the little things that come up from time to time, particularly where it’s helping local organisations with digital and service design. Those notches to the right of that chart included:

Please keep asking me to do those things too.

So that was my third year of independent consulting. I’m still having fun, and my children still have shoes.

Want to be part of year 4? I’m at mattedgar.com