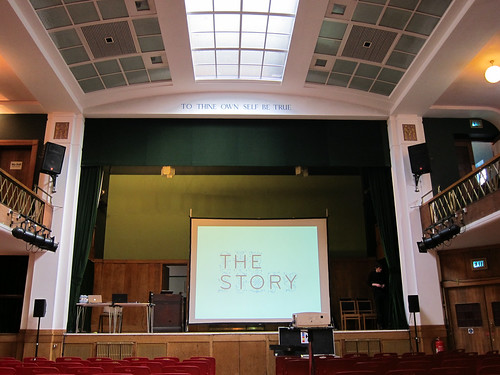 Once more to The Story at the Conway Hall, where facts and artistry have an uneasy relationship.

But the plural of datum is not story – too much information can dull the soul.

By spinning narratives out of facts, storytellers do more than just reflect reality, they change it.

And exposing  game-changing truths can be uncomfortable.

Last year’s the Story was mostly about fragments – Cornelia Parker’s exploded shed, Martin Parr’s snapshots of northern life and Pepys’ Diary sliced and diced by Phil Gyford into 140 characters – until all that remained was a feeling, Adam Curtis’ “emotional realism”. Stories were left hanging by the most tenuous of threads.

For 2012, the narrative was back in town, but not always cast as the hero. The potential for easy stories to lie and mislead was ever-present.

Thanks once again to Matt Locke for curating such an amazing bunch of speakers. Here’s to Story 2013.

3 thoughts on ““Our real stories are too dangerous to tell””

I’m Matt, service transformation director at NHS England, based in Leeds. This is my personal blog, where all views are my own.