When historians of public service come to write the chapter for the 21st Century, more than a footnote must surely be devoted to the One Team Government unconference of 29 June 2017.

What I witnessed at Impact Hub Westminster was not the start of anything new. The roots of this movement go back years – from Martha Lane Fox’s 2010 letter to Francis Maude, through multiple UKGovCamps, and departmental digital transformation strategies. At times the event felt more like a school reunion.

Nor was it the end of our journey. Frustration and mutual incomprehension remain a reality between digital doers, service designers and policy people in many parts of the public sector.

Yet the way the event was conceived and realised felt like a functional prototype of the networked, empathetic, multi-disciplinary leadership that all big organisations will need if they are to flourish in years to come.

The purpose that animates One Team Government is itself a sign of a maturing movement. The digital pioneers won some early victories, but progress often stalled. Fortunately, from among their number is emerging a group who have figured out how to make friends with other tribes. Meanwhile the smartest people in the worlds of policy and strategy are drawn to collaborate with these designers and doers. Together they’re embarking patiently on a project to create shared new ways of working. 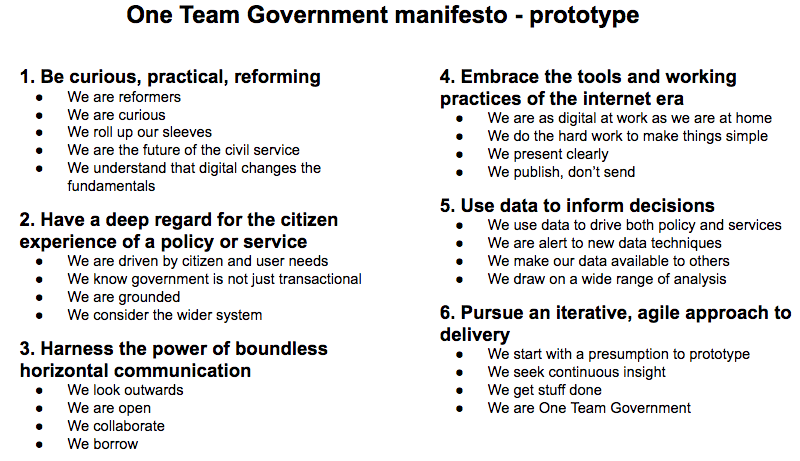 Paul Maltby is doing a great job of prototyping the One Team Gov manifesto, so there’s no point in me repeating here the full set of qualities one team leaders will display. Instead, I’ll focus here on some behaviours that came up in discussion as especially important at this time of synthesis.

They start by assuming that other people mean well and are doing their best. Harry Metcalfe reminded us of the risk of contempt culture, of looking down on others not in our chosen circle. I know I see that frequently among digital designers and developers. I’m sure it is present too among the policy and project crowds. “When people don’t understand each other they sound dismissive of each other,” observed Phil Martin. If we are serious about being one team, that stuff has to stop. Instead, as Lucy Knight put it, “make friends and don’t assume you know everything.” Find the thing that neither of you knows, and seek out the answer together.

They hold out for high standards of user-centredness and evidence. Being part of one team doesn’t mean lowering our standards to the lowest common denominator – it demands that we patiently explain to each other why we set the standards we do. This came across in the session led by Emma Gasson and James Reeve to share what they learned in the original #oneteam on the apprenticeships service. For service designers, this might mean insisting on ethnographic research methods to really understand what’s going on for users. For policy teams, it’s more than OK to seek robust evidence that triangulates the findings from design research. Share the video of the user struggling with the current service. Include the people who will operate the service, as well as those who will use it.

They’re militantly tolerant and inclusive. Kit Collingwood-Richardson, Janet Hughes, and the One Team Gov team worked incredibly hard to make the event a safe, diverse, inclusive space, and I hope their efforts paid off. In her opening talk, Department for Environment, Food and Rural Affairs Permanent Secretary Clare Moriarty encouraged everyone to “bring themself into work”. And that should also go for the people who weren’t at the unconference too. The scientists, the artists, the patient leaders, they may not fit the traditional mould of civil servants, but government needs their involvement more than ever.

They work at their most confident in the open. Clare reminded us of civil servants’ duties to be open and transparent, to maximise the benefits to society, and to account for decisions. We also need safe spaces to consider and make those decisions. Increasingly those spaces will be online, in digital public spheres. It was interesting to hear that when the Institute for Government sought to research among middle-ranking civil servants, the ones willing to talk to them were those working on digital services. I sense that for One Team Gov leaders, working in the open is far more than a legal obligation; it’s an emotional and practical necessity.

They’re not waiting for permission. Here’s the thing: these future leaders are forming their own networks and making stuff happen for themselves. They’re #OfTheGovernment not on the government. Please take that as a promise not a threat: they are a powerful force for good in the organisations lucky enough to have them. I’m quite sure that somewhere in the room that day was a future head of the Civil Service.

Progress. This was fun. So good to see old friends and new faces working together #oneteamgov h/t @kitterati &co pic.twitter.com/J1iLZm4qoq